The Fisherman and His Wife - Stick Puppets

This post is part of a series of posts about "Telling One Story Five Ways." It is also my Flannel Friday contribution for this week.

The second way to tell this story is to use stick puppets. Stick puppets bring the figures off the flannel/magnet board and enable the storyteller to add some action. For example, when the fisherman is in his boat, you can move him up and down to show the motion of the waves. Since I tell rather than read most of the stories in my family story time, using stick puppets for a story adds variety to the program. Since they are so light and take up little space, stick puppets are also easy to bring along for school visits. Other example of using stick puppets can be found on the "Puppet Stories" page.

Stick puppets are quick and easy to make. In this case I am using the same figures I used for the board story. I colored them and glued them to heavier paper. I use card stock or construction paper. I usually leave a border when I cut them out but in this case I did not because I want to be able to put the crowns on the fisherman's wife. I taped a craft stick on the back of each figure. Instead of using glitter glue as I did for the board figures, I used metallic paper and sequins to add some "sparkle" to the fish and crowns. If desired you could make a fishing rod and a boat as well as add waves under the fish. 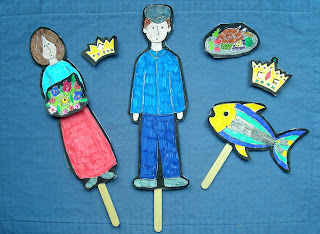 Long ago there was a poor fisherman who lived with his wife in a tiny little shack by the sea. Even though he went fishing every day, the fisherman never caught many fish. Sometimes he caught one or two and sometimes none at all.

One day the fisherman went down to the sea to fish as usual. The waves were high as he went out in his little boat. The fisherman feared he would catch nothing that day but much to his surprise there was a tug on his line ﻿as soon as he put it in the water. The fisherman pulled up a huge fish. It was like none he had ever seen before. Just as the fisherman was about to pull it into his boat, the fish spoke. "Please spare my life!" said the fish. "I will grant you a wish if you do." The surprised fisherman let the fish go. "I could not harm a fish that can talk," he said as he watched the fish swim away.

The fisherman returned home and told his wife about his strange experience. "What did you wish for?" she immediately asked. "I forgot all about the wish because I was so surprised," he replied. "Go back right now and ask for a nice house. I'm tired of living is this run-down shack. I want to live in a nice house with a garden full of flowers. You spared his life so he has to do what you ask." Reluctantly the fisherman went to the edge of the sea and called, "Oh wondrous fish, my wife has a wish." The fish quickly appeared. "What does she want?" asked the fish. "She wants to live in a nice house with a flower garden," answered the fisherman. "Her wish is granted," said the fish as it disappeared back into the sea. When the fisherman returned home there was a lovely house where the shack had been. His wife was standing in front of it holding a bouquet of flowers from a beautiful garden.

Is that the end of the story? No. A week later the wife said to the fisherman, "This house is not big enough. Go back to the fish and ask for a fine mansion with servants. I want to have fine parties and serve lavish dinners to my guests." The fisherman went back to the edge of the sea and called, "Oh wondrous fish, my wife has a wish." "What does she want?" asked the fish popping up above the waves. "She wants a bigger house. She wants a mansion with servants," answered the fisherman. "Her wish is granted," said the fish as it went back into the sea. When the fisherman returned home he found a fine mansion where the house had been. His wife was standing in front of it holding a plate piled high with food.

Is that the end of the story? No. A week later the wife decided that the mansion was not enough. She said, "We should be living in a castle and I should be Queen and you the King." "I don't want to be King!" replied the fisherman. "Fine," said the wife, "I will be King instead." She made the fisherman go back to the edge of the sea to call the fish. "Oh wondrous fish, my wife has a wish," called the fisherman. "What does she want now?" asked the fish coming up from the water. The fisherman answered, "She wants to live in a castle and be King of this land." "Her wish is granted," said the fish as it dove back into the sea. When fisherman returned home he found a castle where the mansion had been. Inside his wife sat on a throne wearing a crown.

Is that the end of the story? No. A week later the fisherman found his wife staring up at the sky. She turned to him and said, "Go back to the fish and tell him that I want to be Ruler of the entire universe and have an even bigger palace up on the moon." Sadly the fisherman went to the edge of the sea calling, "Oh wondrous fish, my wife has a wish." "What does she want this time?" asked the fish coming up out of the sea. "She wants to be Ruler of the universe and have an even bigger palace on the moon," replied the fisherman. "I cannot grant that wish. No one can rule the stars and the moon. She must return to the home that she deserves," said the fish as it dove into the sea. The fisherman returned home to find that the huge palace was gone and their miserable shack was back. There the fisherman and his wife lived for the rest of their lives. The wondrous fish was never seen again.

Is that the end of the story? Yes!

This week's Flannel Friday Round-Up is hosted by Kendra of Read Sing Play.
Posted by Linda Meuse at 2:26 PM