There are fewer submissions than usual this week. I'm envisioning legions of youth services librarians enjoying much needed post summer reading program vacations with absolutely no thoughts of flannel boards. Alas, some of us are still involved with summer programs (our final program is Monday) and others are busy planning fall activities. So for those of us still around, here's this week's Flannel Friday Round-Up:

Lisa of Thrive After Three has made a flannel story out of The Day the Crayons Quit. She combines felt pieces and props to make the story work for large groups.

Kathryn of Fun with Friends at Storytime has made the cutest spiders to go with the rhyme, "Five Little Spiders." Yes, cute spiders - they have big smiles and sparkly legs. Kathryn has been busy planning her October programs for in addition to spiders, she has made colorful firetrucks for children to "drive" to the flannel board. They go with her rhyme, "Calling All Firetrucks!"

Kristen of Let the Wild Rumpus Start has created an adorable set of figures for the flannel board from Sandra Boynton's Happy Hippo, Angry Duck. Now this small book about moods can be shared with a group.

Lisa of Libraryland shows how her technique for making felt board pieces has changed. She points out that they have become larger and more vibrant and she shares her tips with us by showing how she made the figures for The Big Red Barn.

Rachel of Rachel Moani: The Crafty Life of an Almost Librarian identifies with Little Monkey of the story Monkey Face. Not only does she show us her fantastic felt pieces but she also graciously provides us with a template for them.

Bridget of What Is Bridget Reading? wrote some rhymes to go with her lovely crocheted cupcakes. (The first one made me, as my grandson would say, hungry for cupcakes.)

Amber of Artistic Literacy has created a colorful truck matching game using die cuts backed with black felt. She provides a song for identifying the trucks and people to match with them.

The Flannel Friday blog is the source for everything you need to know about Flannel Friday.
Posted by Linda Meuse at 2:49 PM 9 comments:

While searching the Web for folktales about animals that lived underground, I came across the website of storyteller Dr. Mike Lockett. Among his selections of folktale retellings was a story based on a Turkish folktale, "The Three Hares." I liked the fact that it was similar to "The Three Little Pigs" and that it could easily be made into a board story. I made some changes to the story. For example, the hares are not eaten but end up together in a very large burrow. I also called it the "The Three Little Rabbits." I wanted to make it similar to the version of "The Three Little Pigs" that I tell.

"The Three Little Rabbits"
Based on a story by Dr. Mike Lockett
Mother Rabbit decided that her three little rabbits were now old enough to leave their crowded burrow and make a home of their own. Before they left, she said to them, "Make sure you dig deep into the ground so your home will be nice and safe."
The first little rabbit was lazy. He didn't want to dig and dig. He made his house out of sticks and leaves and bushes and grass. It was right at the edge of the forest. He was hungry after he finished so he went to the meadow to find something to eat. He did not get very far when a fox appeared. The fox was hungry too and when he saw the little rabbit he found his dinner. The fox ran after the rabbit. The fox was fast but fortunately the rabbit was faster. He ran to his home. When the fox got there, he knew exactly what to do. He raised his paw and with one swipe he knocked over the rabbit's house. The little rabbit ran as fast as he could deep into the woods. The fox followed but soon lost him. Fox returned to the meadow to find something else for dinner.

The second little rabbit decided that he did not want to live underground. He went into the forest and found a tree with big roots and decided to build his house between the roots. He made it out of straw and twigs. He too was hungry after he finished so he went to the meadow to find something to eat. Who was also in the meadow looking for something to eat? It was the fox and he went after the little rabbit as soon as he saw him. Fortunately this little rabbit could also run very fast. He was in his new home when the fox got there. The fox decided to knock that house down too. He raised his paw but only knocked part of the house down. He raised his other paw and with one more swipe knocked the rest of the house down. The little rabbit ran as fast as he could deep into the woods. Soon the fox lost him too. A now very hungry fox returned to the meadow.

The third little rabbit paid attention to what her mother said. She went deep into the forest and dug herself a nice burrow. She spent the entire day digging. She made a very large burrow for she did not want to live in a crowded home. This one was much larger than her old home. She was very hungry when she was finished so she went to the meadow to find something to eat even though it was very late. Unfortunately the fox saw her as soon as she got there but this little rabbit was very fast too. She ran deep into the woods with the fox close behind. This time the fox did not loose the little rabbit in the forest but the little rabbit did make it to her home. This time the fox had nothing to knock down. There was just a hole in the ground. It was not even big enough for fox to stick his head in so again fox lost his dinner. He went to bed very hungry that night.

The third little rabbit was glad that she had listened to her mother's advice. She had built a nice safe home and it was big enough to share with her two brothers without it being crowded at all.
﻿
Notes: This version was written to be told with magnet/flannel board figures. The animal figures below are based on Microsoft Publisher clip art. The "homes" are original. When telling the story, add the other rabbits to the burrow at the end. 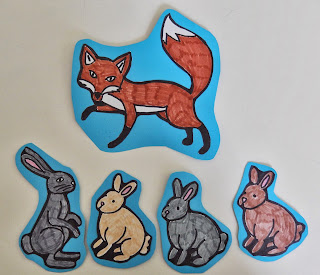 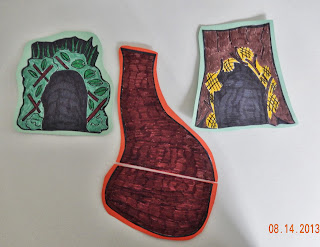 Board: "The Three Little Rabbits"

Crafts: Mole and ant stick puppets from the 2013 CSLP Manual
Underground animals in burrows - Children glued "burrows" of different sizes to brown construction paper (cut from orange construction paper). They then matched each animal to the right sized burrow. After the children glued the animals to their burrows, they colored them with crayons. 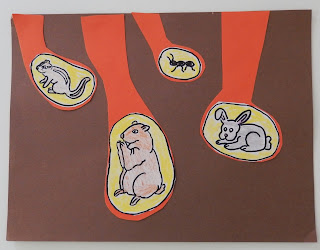 Notes: The theme of this program ties in with the 2013 CSLP general theme, "Dig Into Reading." It was a small group due to vacations and the change of date (due to broken air conditioning last month). "Five Hungry Ants" was the most enjoyed because everyone got to sneeze loudly each time an ant marched into the pepper. The audience also liked "Moles New Hole" and "The Three Little Rabbits."
﻿
Posted by Linda Meuse at 3:50 PM No comments: 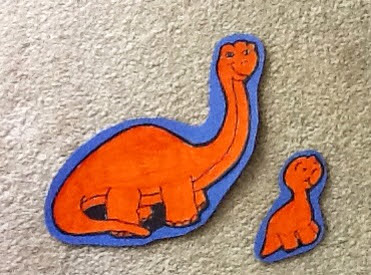 Opening Song - "If You're Happy and You Know It"

Activity: "I Spy" Six dinosaurs, each a different color, were on the walls of the storytime room. I would say, "I spy with my little eye, a green dinosaur!" The children would then look around and find it. The caregivers helped the younger children.

Book: How Do Dinosaurs Eat Their Food? by Jane Yolen

Rhyme/Song: "One Baby Dinosaur Went Out to Play" I made a prop instead of board figures.

Book: If the Dinosaurs Came Back by Bernard Most. I did not read this at the first session. The second session had more older children so I added this book.

Rhyme: "Five Fat Funny Dinosaurs" This is a monkey mitt rhyme that I have used for years.

Book: A Number of Dinosaurs by Paul Stickland

Activity/Game: "Baby Dinosaur, Baby Dinosaur" Baby dinosaur is hiding from his mother and the children have to find him. This is a variation of the "Little Mouse" game.

Posted with Blogsy
Posted by Linda Meuse at 1:08 PM No comments: