Book:  If you Were a Penguin by Wendall and Florence Minor

Board Rhyme:  "There Was a Little Penguin" 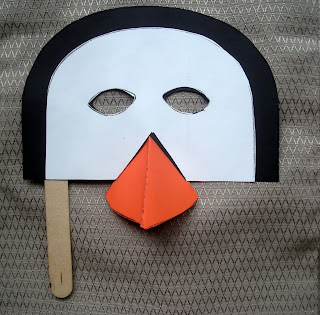 Notes:  There were several new families at this program. The ages ranged from infant to age 5. This was a younger than usual group. They were a bit more wiggly than usual as well but settled down when asked. When I talked about the North and South Poles, the five-year-old had no problem informing me that polar bears lived at the North Pole and that penguins lived at the South Pole. "Penny Penguin's Magical Meal" was the most liked story which made making the prop worth the effort. The children also enjoyed the guessing game. The penguin mask was also a big hit. It was fun to see one little guy go waddling out of the room holding up his mask.
Posted by Linda Meuse at 8:02 PM No comments:

Originally I was going to use "Pippa's Penguin" by Susan Daily for my penguin program. Then I decided to use a similiar concept but a different story. I wanted the story to go with "Porter Penguin's Adventure" so I wrote my own. Rather than penguins in a zoo, I wanted them in a more natural habitat. I used a prop for this story but it can easily be used with flannel/magnet board pieces instead.

Penny Penguin lived on an island almost always covered in snow. Only during two months of the year is there no snow. It was that time of year now. The snow was gone leaving behind a hilly, rocky landscape. Penny decided to explore to see if she could find something new. Last year she found tiny flowers blooming in wind-protected crags in the hillside. Penny started climbing over the rocks. It took her a while and she was starting to get hungry. Just then she spied a small pond hidden among the rocks. It was something new that she had never seen before. She looked into the crystal clear water and couldn’t believe what she saw. It was full of colorful fish. Just then Penny’s tummy started to rumble and grumble. Those fish looked mighty tasty. Penny grabbed one and ate it. It was delicious. Then something strange happened. Her tummy felt funny. She looked down and her white front had turned blue – the same color as the fish she had just eaten! “Wow!” said Penny. “That fish has turned my tummy blue! I wonder what would happen if I ate a green fish.” She decided to find out. She ate a green fish and sure enough her tummy felt funny again and this time when she looked down her tummy had turned green. “This is fun,” said Penny and she promptly ate a purple fish. Sure enough she had that funny tummy feeling and when she looked down her front had turned purple. Then she saw a fish with lovely spots. “I have to eat that one,” said Penny. “Then I’ll have the fanciest front on the island.” Penny ate the spotted fish and sure enough when she looked down she had a fancy spotted front. After a while Penny became a bit dizzy looking at all those spots. “Maybe this wasn’t such a good idea after all,” said Penny. “I think I would rather be my plain old self.” She looked at the remaining fish in the pond. It took a while but she finally saw a plain white fish. Well, it was almost plain. It had one black spot on it. “One spot won’t matter,” said Penny. She ate the plain fish and soon her front became white again though it did have one black spot right in the middle of her tummy. So now there is a penguin waddling around the island that looks like she has a bellybutton!

Note: This story was written to be used with a penguin prop or flannel/magnet board pieces.

This is the prop that I made to go along with the story: 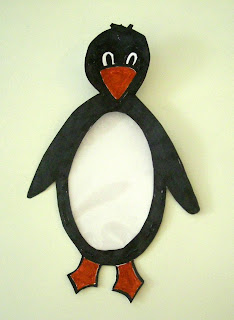 It is similiar to the one I made for Drakestail only smaller. I drew a penguin on card stock. After I cut out the penguin, I cut out the white front and glued a piece of clear plastic on the back so that the different colored pieces will show. I used a scrap piece of laminating film. I cut around the beak so she could "eat" each fish. When telling the story I pull out each front piece to reveal the new color. 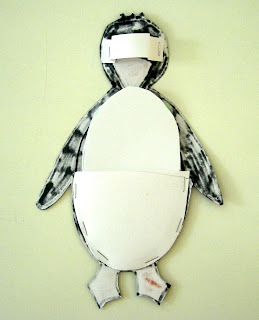 The "pocket" stapled on the back holds the different fronts. I also stapled on a handle so I could hold Penny. I colored the parts of the staples showing on the front with black marker to make them less noticable. 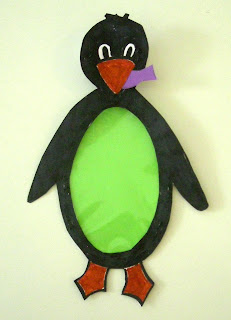 I cut the fronts from various colors of cardstock. The dotted front is from an inexpensive booklet of textured and patterned paper that I purchased at a craft store. 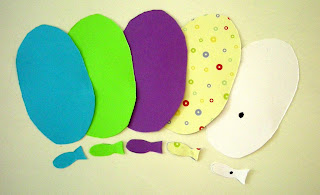 Not Quite There Yet

I feel like the tortoise - slow and steady. I'm making progress but it is slow. I hope to post something useful next week.

This week's Flannel Friday Round-Up is being hosted by the Storytime Katie blog.
Posted by Linda Meuse at 5:08 PM No comments:

This week's Flannel Friday Round-Up is hosted by Miss Courtney Meets Bobo. Miss Courtney graciously stepped in to host the round-up for me. (The damage to my knee was greater than expected so my recovery from what I thought was going to be a simple surgery has turned out to be more difficult than expected. Time and physical therapy will help.) I hope to start posting to Flannel Friday next week. I still have another penguin story in the works. As always, everything Flannel Friday can be found here.
Posted by Linda Meuse at 3:06 PM No comments: