This week's Flannel Friday Roundup features Halloween storytelling ideas and is hosted by Mary of the Miss Mary Liberry blog. This year I have a Halloween draw and tell story:


Costume...Or Not?
A Halloween Draw and Tell Story
by Linda Meuse
Notes from the Story Room
http://meusenotes.blogspot.com/﻿

Tom and his brother Will had spent the evening trick-or-treating along their street. (1) The last house on the street was set back from the street but there was a path to the door. (2) It was lit by a smiling Jack O' Lantern. (3) They went up the path to the huge front door. (4) After just one knock a ghost came through the door. (5) He was holding two of the biggest chocolate bars that Tom and Will had ever seen. (6) "Thank you so much!" said Tom as the ghost dropped one into his bag. "Wow, thanks," said Will when he got one too. "By the way," added Will, "That's the best ghost costume I've ever seen." "Thank youuuuu...," said the ghost as it floated back through the door. Tom and Will started down the path but suddenly stopped. They both looked at each other realizing what had just happened. "Maybe that wasn't a costume after all!" exclaimed Tom. The boys ran home as fast as they could. What do you think? Costume...or not? 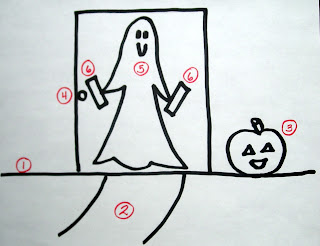 Snacks for Ghosts and Bats in Hats (board story and game)