When the Moon Fell From the Sky

This is board story for an upcoming family story time.  It is adapted from The Night the Moon Fell: A Mayan Myth Retold by Pat Mora. I selected this story because it takes place in the ocean which is an unusual setting for a story about the moon and stars. As with many folk tales, the book retelling is a bit long for my group. My shorter version can be found as a Google document here.

The "divided" Moon is based on clip art in Microsoft Publisher. I also found a similar one searching Google Images. The other figures are also based on images in Microsoft Publisher. I did draw my own coral and kelp (squiggles are easy). I used silver metallic marker for the fish scales. (I got a bit carried away making fish. You only have to make enough to go around the moon.) I also added some glitter glue to the moon.  I made one whole moon for the beginning of the story and one broken moon for the middle of the story. I made one half of the broken moon with scales glued on to piece with the half moon at the end of the story. Once the moon is back up in the sky scatter the fish around the board to represent the stars. 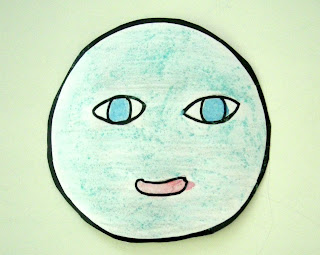 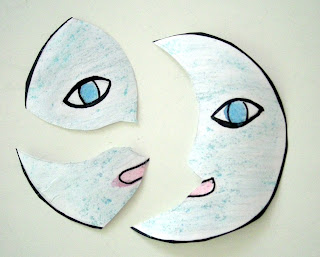 Moon in the Ocean 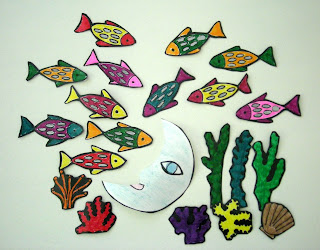 Moon Put Back Together 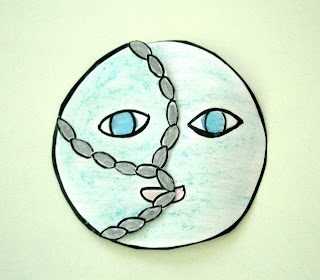 Moon Carrying Fish to the Sky 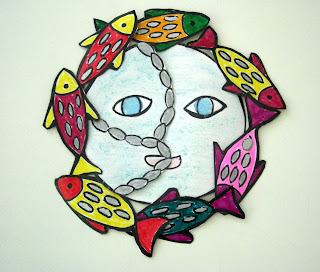 This week's Flannel Friday Round-Up is hosted by Sarah of Read It Again! Information about Flannel Friday including the schedule of future round-ups and links to the previous ones can be found at the Flannel Friday website.
Posted by Linda Meuse at 2:17 PM