Variations on a Game

Summer programs are winding down and planning has started for fall.

One of the most popular flannel board activities for toddlers and preschoolers is "Little Mouse, Little Mouse."  Unfortunately I did not write the source on my copy but numerous variations can be found online.  (I tend to think I won't forget something and I always do.)  Years ago I did my own version called "A Daisy for Maisy" which I used for spring:

A daisy for Maisy,
Where can it be?
Behind the rock, the bush,
The house or the tree?

I drew a very simple house, rock, bush and tree.  Maisy can be found in coloring sheets online.  Draw a simple daisy but make sure it is smaller than the objects it will hide behind.  I drew on craft pellon but simple objects can be made from felt as well.  I made a laminated paper version for my current library since we use a magnet board for our storytelling.  Hide the daisy and have the children guess where it is.  Do this a few times to give them more chances to get it right.  Often once they get the hang of it, I will hide it in the same place twice.  They rarely catch on.  With the "Little Mouse" version of this game, I will hide the mouse under the houses of the least popular colors (usually brown or orange) and avoid the most picked colors (usually purple, red and blue.)  Every once in a while I have a child who figures it out.

Now that fall is coming I have made a version featuring a squirrel:


Squirrel found a pretty leaf,
But the wind blew it away.
Let’s help Squirrel find it
And then we all can play.

﻿This rhyme does not limit the number or kinds of objects so that anything can be used.  As long as there is a squirrel and a leaf, the other objects can be logical (rock, log, bush, flower) or silly (beach ball, dinosaur, snake, hot dog).  More objects can be added for older children. 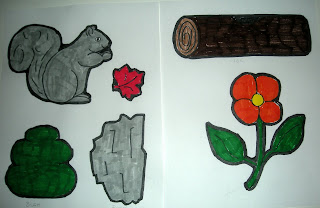