How Ishikawa Became a Kite Maker

This prop story takes a bit of effort to prepare but the end result was well worth it.  It was the hit of my March Family Story Time program.

Although the story may seem long, the narrative flows quickly.  I greatly simplified the original story, The Dragon Kite by Nancy Luenn, by eliminating all but the main characters.  I also changed the "villain" to the Shogun rather than his son.  The story has enough action and suspense to keep the audience interested.  My version can be found as a Google document here.

The two most important props are the dragon kite and the dragon it becomes.  I made stand-up figures for Ishikawa and Katsuta, but they are optional.  I looked at pictures of Chinese and Japanese dragon kites and chose the traditional style made out of circles for my kite.  This is also the style used in the book's illustrations.  I cut out several circles from yellow card stock with the circles getting smaller toward the tail.  I simply colored the edges with red marker.  On one of the largest circles I drew a dragon face with marker and used red and orange paper for the rest.  My original plan was to string the circles together like a kite but once I did that, it was difficult to keep the circles from twisting when I held the kite up.  I removed the yarn and just glued the circles together.  I did add yarn for the harness. 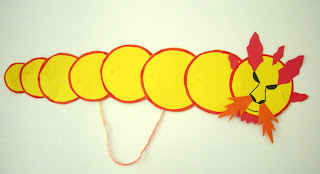 I then made the dragon out several pieces of yellow textured card stock.  I used the first piece for the head and drew a body across the others.  I cut out the body pieces and taped them together.  I also made claws for the dragon and glued them on the body.  I drew a dragon face and cut out the other features from red textured paper.  The flames were cut from foil paper.  I also added scales cut from foil paper.  I used my imagination to make the dragon though I did use the same colors as the kite for I wanted the children to get the connection that the dragon was once the kite.

The important thing to remember when creating these props is that the dragon should be much larger than the kite.  My dragon is around 42 inches and the kite is around 18 inches. 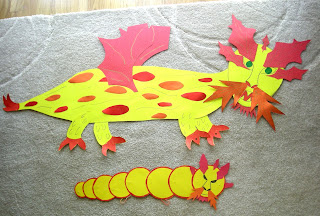 I made figures for Ishikawa and Katsuta using clip art from Microsoft Publisher.  I glued them onto heavier paper and made stands for them.  I just put them on the large table behind me when I told the story.  They seemed a bit lost sitting on the table with my other storytelling materials.  The next time I tell the story, I will set them on my Amazon theater stage (overturned amazon.com box). 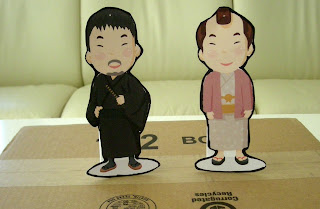 I used paperclips as hooks and put them in Ishikawa's and Katsuta's heads.  That way I could hook Ishikawa to the kite harness when he goes up to the palace roof. I punched holes in the dragon's claws and hung Ishikawa and Katsuta from them when the dragon carried them off.

I had the dragon face-down on a table behind me. When I lifted him up, several of the children oohed and ahhed. It wasn't my artwork as much as his large size that made the impression. 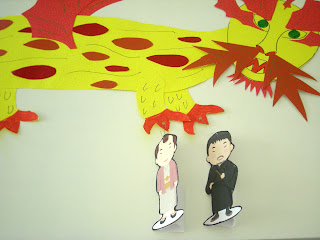